Listen to the audio of an Aborted Baby Soul. 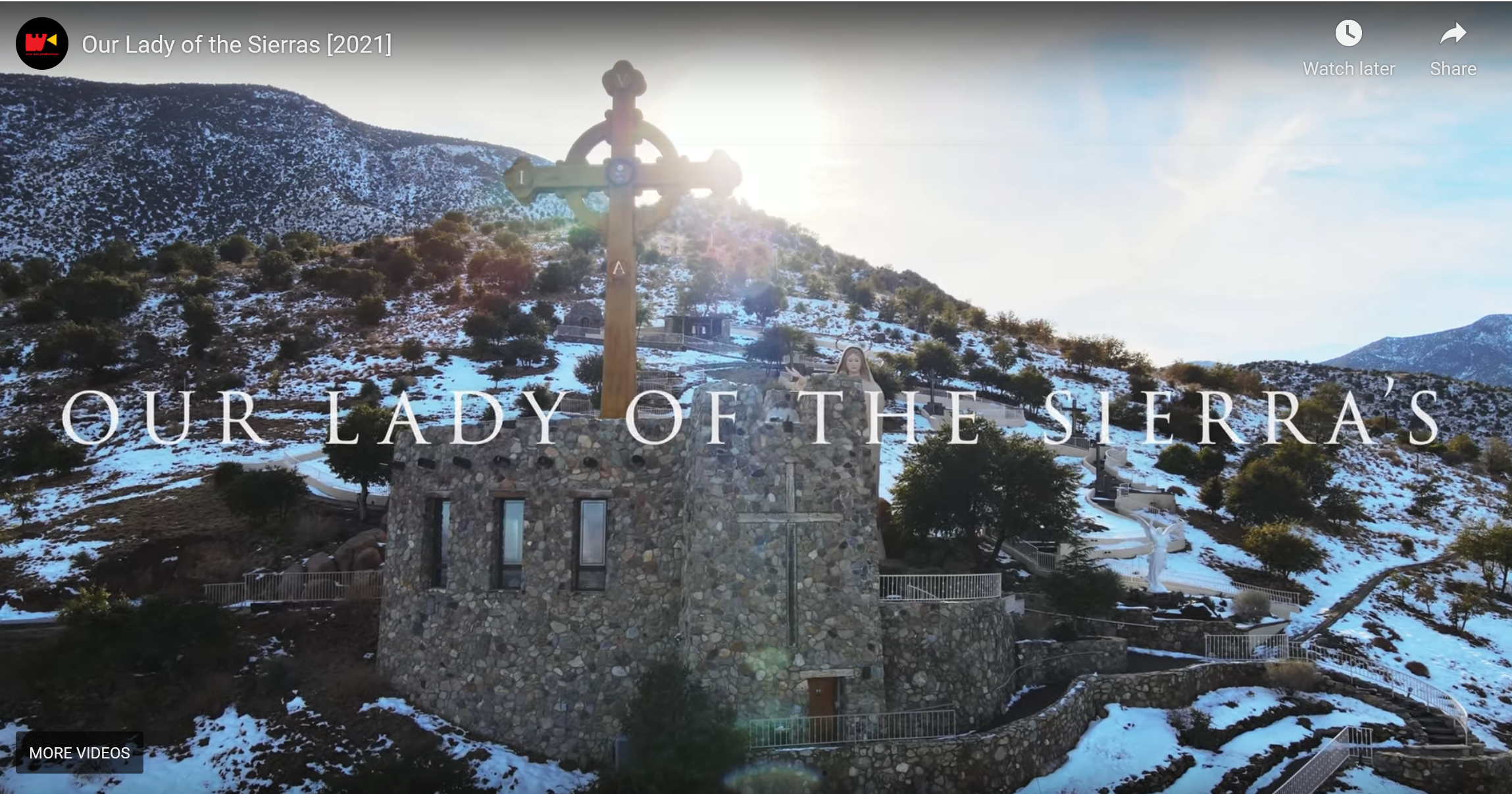 La Purisima is named in honor of the Immaculate Conception (in Spanish, La Purisima Concepcion) - was incorporated in the Spring of 2000 to provide a "place apart" in an atmosphere of serenity and peace, where one can experience spiritual renewal and growth in the beautiful high desert of Southeast Arizona.

For the many groups and parishes of the Diocese of Tucson, as well as our other guests, La Purisima Center provides a "desert experience" of prayer and quiet reflection. We are particularly interested in providing retreat facilities for youth groups, but we welcome all groups with special needs.

For more information, please contact the Retreat Coordinator at (520) 240-5658 or LPRetreatcenter@gmail.com or visiting http://www.lpretreat.org

History of the Shrine

It may trace back to the forming of the Huachuca Mountains that were formed eons ago by our Creator in Southeast Arizona. In early times when the Native Americans occupied the area, legend confirms the mountains already had spiritual meaning to them. In the early 1600’s the shrine area was first explored by the Spanish and later became part of Mexico. Upon the signing of the Gadsen Purchase in 1853 the area became a territory of the United States. By the 1870’s well before Arizona became a state the area became known for mining, lumbering and raising cattle. The Indian chief Cochise and Geronimo were some of the last hold outs in what is now Cochise County Arizona. Nearby Fort Huachuca was opened in 1877 to deal with the Indian problem and was the early home of the Buffalo Soldiers. This fort is now the “Intel Center” of the US military and is located 12 miles North of the shrine next to the city of Sierra Vista, Arizona. To the East are the old west towns of Bisbee and Tombstone.

Although the state and federal governments own the majority of land in Arizona some land became available for private use due to land grants, mining claims under “patent laws” and purchases through normal channels. In 1987 a couple from northern Illinois [Gerald and Patricia Chouinard] came down to the area to visit a family member and while hiking stumbled across a “for sale” sign in the weeds indicating a parcel of land was available in Ash Canyon on the lower mountain slope. This parcel allowed an unlimited panoramic view to the East of the high desert San Pedro valley 400 ft below and opposite to the West the winter snow capped Huachuca Mountains. Upon investigation the couple purchased eight acres of land in 1988 for their future retirement home and consigned an architect to draw up plans for a unique hillside residential home.

In 1990 just prior to commencing construction the couple felt called after reading an article about a religious event happening in a place called Medjugorje,Yugoslavia. In November 1990 as with many thousands of others they went on the Medjugorje pilgrimage with a small group flying out of Chicago. With the usual unforeseen hardships the couple found an area that radiated “much spirituality”,especially impacting the convert wife's Catholic faith. It was one of the few times individuals were seen pushing to get into a church. However the couple did not experience very much exceptional visual phenomena as many others did. Most visually impressive was the mountain view of the valley below while standing by the large stone cross located on Mt. Kriscivac. It had some similarities to the land they had purchased for their new home above the 5,000 foot high Arizona Sonoran desert. Upon returning in November 1990 the couple commissioned the construction of their Arizona home which was completed in late 1991. Near the end of the construction as the husband was standing with the contractor looking down into the San Pedro Valley below, He [the husband] said it would be charming to erect a twenty foot cross that faces the valley below. This was the moment destiny began its further course. Thinking of the cross in Medjugorje, the size and composition of the proposed cross grew. As a result of an atrium being constructed in the couples home they became familiar with a company in Tucson that was capable of fabricating large remarkable creations formed out of fiber glass, steel and concrete composition.Upon consultation it was determined that if a larger cross was desired one could be built over 70 feet high. The wife expressed a strong desire that a statue of The Blessed Virgin Mary belonged next to the cross. It was discerned that the statue of Mary should have an outstretched arm pointing to the cross; not only to the cross but also to Mexico which is five miles due South. Structural plans were then drawn up for the proposed project and then the Cochise County Planning Department was consulted for preliminary approval.

Initially they, [now called the founders] were told what they had in mind probably could not be done in Cochise County. Regulations did not normally allow structures, religious or not over thirty feet high. However there were a few exceptions; one being that monuments were exempt. They were also told no permit could be issued on the two proposed structures alone. It was then determined that a small chapel would be acceptable to comply with the Cochise County regulation and the cross could legally be considered a monument. Again destiny dictated a small unplanned chapel would join the Cross and Madonna statue. Many other situations and regulations almost stopped the project. Based on tentative county permit approval the Cross and Madonna fabrication projects were commissioned in the fall of 1993.

The couple sharing their enthusiasm with a neighbor became a mistake. Immediately a group of opponents organized and on the basis of the project being permitted or not, it was not going to be built in their Canyon. Opponent’s organized and funds were collected as faraway as California to file any kind of action necessary to stop which one called “Visual Pollution”. At first the local paper picked up the controversy, then the Tucson TV stations and finally the newspapers as far away as The Los Angeles Times. The founders could not believe the intensity of the opponent’s opposition. However this intense opposition by the opponents also sent out signals of increasing support for the project from many other observers. As a result, this also became a political issue and more county hindrances mysteriously appeared. Before a permit was issued the opponents filed a complaint with The Board of Adjustment for a hearing to rescind the original pending permit. The opponents lost and the county issued a permit, which opened the door for a second Board of Adjustment. At the second hearing, even with the support of Pastor Fr. Bryerton and a large supporting group, it was apparent the founders were going to lose. However based on a voting technicality the county issued permit was still allowed. The opponents immediately filed an appeal in Superior Court in Bisbee Arizona to stop the project. The founders began to prepare to commence work on the project, as the lawsuit had no direct effect on the upcoming construction. Three months after the permit was issued, the county mysteriously came up with a directive that stayed the permit based on an approach road technicality. Complying with the necessary approach road changes triggered another county directive that dictated another permit application would be necessary. In the fall of 1994 after complying with the new impediments a second county permit was issued. This opened the door for a third Board of Adjustment and this time it was an apparent done deal in favor of the opponents. The permit was legally overruled and the project was stopped cold. Filing their [the founders] own lawsuit in Superior Court would take at least 18months to be heard. The founders then had to either quit or carry on with their own lawsuit in Superior Court to reinstate their permit. Of interest The County Planning Department director stated on Tucson television that all requests by all their department had been complied with. Three Board of Adjustment appointees consisting of two neighbors living in the canyon and another from outside had the power to stop all the efforts of three years of hard work. In 1995 the founders decided to file their own lawsuit in Superior Court for a reinstatement of their permit. In the fall of1996 after spending approximately fifty thousand dollars in costs and legal fees,the presiding judge in Superior Court reinstated the permit. In essence confirming all conditions requested by the county had been met and the Board of Adjustment was in error. Although the suit was always a strong property rights issue, it never became a strong religious issue. Project construction started in March of 1997.

In June of 2011 Our Lady of the Sierras suffered a loss due to the fire that started on the lower end of the Huachuca Mountains, Montezuma Peak. The fire first broke out in Mexico and reached the Huachuca Mountains where many homes, including the Shrine suffered loss or damage. Through our Faith, we persevere and the Chapel has been restored and the surrounding area.  Mary's Knoll, which suffered a loss is under construction and we expect it to be opened to the public in the late spring 2014, the latest, early summer 2014. Please visit our page to view the progress of the construction.